Wrought iron is a raw material although the expression Wrought Ironwork is frequently used today to describe fancy ironwork which is in fact made from mild steel. Wrought iron was first produced around 1750 when Abraham Darby II (1711-1763) solved the problem of making a suitable pig iron using a coke furnace. His father Abraham Darby I (1677-1717) had developed the first coke furnace at Coalbrookdale in 1709 but the molten metal produced was poured into sand moulds to make cast-iron goods.

The process of making wrought iron was complex, time consuming and it required a highly skilled workforce. Molten iron was cast into ingots (pigs) and stacked one way then the other in a pile on the puddling hearth. Here it was heated and “puddled” to remove impurities. The iron was then transferred to the shingling hammer which was a gigantic power hammer which was capable of earth-shattering blows which formed the iron into a billet. This was then rolled, cut up into lengths, re-stacked and the whole process repeated over again. The more times the process was repeated, the better the quality of the finished wrought iron.

The rolling process was an art in itself requiring a minimum of four men with massive long handled tongs which hung down on chains from the factory ceiling. A pair of men stood at each side of a line of rotating rollers and had to catch the red hot bar as it came through the rollers and guide it back through the next set. As the bar was rolled progressively smaller it grew longer and became increasingly difficult to control. The risk of injury was ever present.

The result of all their labours was a fantastic material which was a revolution in its time. However, there were, and still are, disadvantages which are inherent in wrought iron. It is not homogenous like mild steel but it is laminated like plywood and has a tendency to de-laminate over time when moisture penetrates between the laminations and forms rust which expands the material to many time its original size causing damage to any adjacent materials. 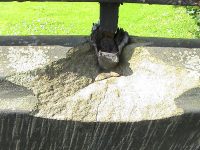 This collateral damage would not have occurred if the posts had been made of mild steel or pure iron which are both homogenous and only rust on external exposed surfaces.  Although wrought iron has not been manufactured for nearly fifty years there is a great deal of reclaimed wrought iron available. Dismantled bridges, railings and discarded anchor chain being common sources. This can be used where a client specifically requests wrought iron perhaps for restoration or reproduction of an antique. However, given the uncertainties of quality and provenance inherent in the acquisition of any re-claimed or salvaged materials, and the potential disruption of the laminations during the jointing and re-rolling of salvaged wrought iron, we would always recommend the use of new pure iron, mild steel or stainless steel. All of these new materials are certificated with known composition, reliability and performance and meet fully with our modern world’s ever-increasing demand for accountability and traceability.